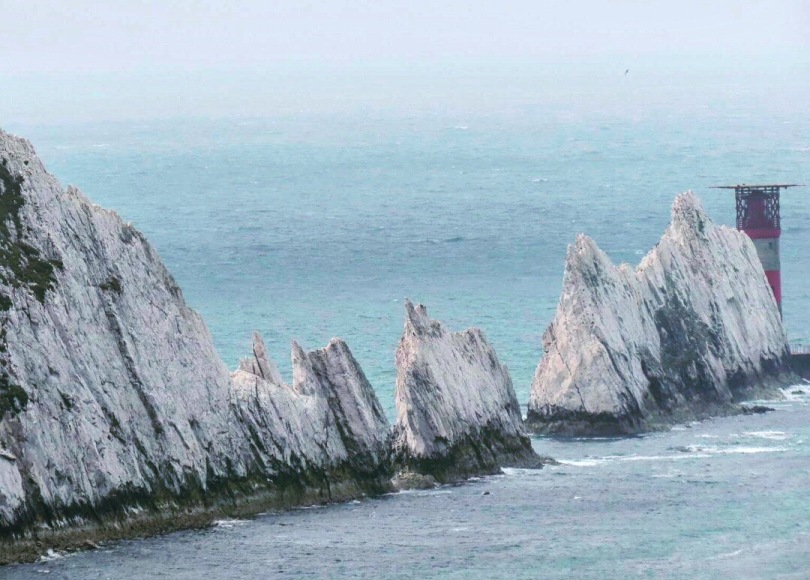 The Needles…The Needles and Alum Bay are situated off the southwest coast on the Isle of Wight. The Needles are a row of jagged, spindly chalk stacks that lead out in to the sea. The name, Needles, is thought to come from a particularly distinctive needle-like chalk pinnacle known as Lot’s Wife which was situated slightly to the north. Unfortunately, this pinnacle crashed in to the sea in 1764. Today these rocks are some of the most photographed in the world.

The Needles are situated in Alum Bay, itself very famous for the many types of colored sand found along the cliffs there. The sands consist of feldspar, quartz and mica which are generally white in color. However, the pretty colors have come from contamination by other minerals. Visitors have been coming to Alum Bay since the 18th century and one interesting activity is to visit the Visitors Centre and make your own lovely colored sand keepsake (see photo 2).

Looking out you will also see Trinity Lighthouse perched at the end of the row of Needles. The light is 80 feet above water and can be seen fourteen miles away. One interesting characteristic is that you will hear it’s foghorn every fifteen seconds during periods of low visibility.

Fun Fact: Marconi sent his very first wireless transmission from the Royal Needles Hotel in 1897. In 1898 messages were received at Queen Victoria’s Osborne House and to the Royal Yacht.

Extra Fun Fact: The chalk ridge that the Needles have formed from is part of a ridge that stretches all the way to Purbeck in Dorset (see my post Corfe Castle too here).

Extra Extra Fun Fact: The lighthouse had keepers who would spend two months on and one month off. It was automated in 1994…

The Needles website has all the information for a wonderful visit.