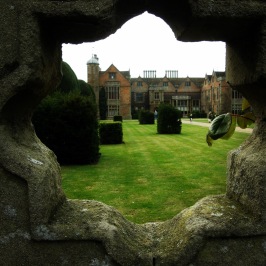 Yesterday we noted that Charlecote Park, Warwickshire was one of many National Trust houses that took advantage of a water feature. In the case of Charlecote, it is the actual River Avon which runs through the estate. But what other secrets does the property hold? While this is popular property can get a little busy at times it does have some interesting history which is worth exploring. For example, the Lucy family owned the land where the property stands since the 13th century. The house that you see today is from the 16th century and renovations were made for when Elizabeth I briefly stayed there. While in 1760, the artist Thomas Gainsborough painted a portrait of George Lucy for the princely sum of 8 guineas (just over £8)! Much of the inside of the house today is decorated as it would have been in Victorian times. The Lucy family still live in one wing of the house…

Fun Fact: There is a tale that William Shakespeare poached rabbits and deer in the grounds of Charlecote House. Today there is a deer park where deer can be seen year round.

Extra Fun Tip: Pair Charlecote with one of the other many attractions in the area, Warwick Castle, Stratford upon Avon, Coughton Court…the list is endless!

Charlecote info here for the house and here for some interesting facts.

Olive decides the best place in the house to sit is on top of recipe books! Cooking is very interesting, especially flour... #cat #olive #catsofinstagram #siberian #catsinquarantine #cats_of_instagram #cooking #baking #stayhomesavelives #recipe
One of my favorite photos from @woodenshoefarm. This is an old photo - probably ten years old. Unfortunately due to current restrictions we will miss the tulips this spring, but will be back next year! @woodenshoefarm #tulips #woodenshoetulipfarm #flowers #spring #springflowers #oregon #woodburn #red #yellow #pink #brittrip2017
A sunset in Astoria, Oregon. This was taken in the summer of 2011 - time flies! I still remember how warm that evening was. Spot the heron! #astoria #oregon #sunset #heron #summer #weekend #nofilter #brittrip2017 #oregoncoast #settingsun #columbiariver #pacificocean #astoriacolumn
Blossom in my garden today. As the seasons change, spring tells us that there is new life and renewal all around, the birds are chirping and feeding babies and the flowers still bloom. When we are through this strange and sudden moment, maybe we’ll have a new appreciation for the little things we used to take for granted. ☺️🌸🌸🐣🐣 #blossom #spring #pinkblossom #seasons #sthelens #oregon #garden #yard #brittrip2017 #flowers #springtime #renewal #stayhomesavelives #coronavirus
https://youtu.be/OIVhfKBuARI Soothing movie of the Columbia Gorge. Only 4 minutes! Take a look! 😊 To see more videos see my posts on www.mybrittrip.com Stay safe, stay healthy! #columbiarivergorge #columbiariver #columbiagorge #multnomahfalls #oregon #washington #skamania #bonnevilledamfishhatchery #roosterrock #cascadelocks #sternwheeler #hoodriver #mybrittrip.com
https://youtu.be/xMq2xTiblUE Around and About in St Helens, Oregon. A short movie showcasing St Helens, Oregon.